“Creativity Contest-The Posing Jewel”, second edition.
An international contest for jewellery designers and artists which will enliven “The Posing Jewel” - exhibition, opening on May 13th 2017.
This second edition of the biennial competition organised by Creativity Oggetti features the ring as a sculpture-object in space, intended not only as a jewel but as decorative element. The wide response from many different countries, gives life to an exhibition where the selected artists demonstrate a great adhesion to the concept, without ever neglecting the specificity of their own research.

The decisive role of the visiting public, together with the jury, will be the one of assigning the designated prizes at the end of the exhibition, starting from the most desirable one: the still-life photo-shooting of an entire collection by Roman photographer Federica Cioccoloni, who realized the particularly elaborated images of the works on exhibit, specifically studied for this occasion. Enliven by a playful spirit, the competition’s aim becomes an opportunity to propose a more comprehensive investigation in contemporary jewelry, which goes beyond the however interesting contest between jewelry designers of international provenance and the end result that decrees the winners. Contamination of languages, technical wisdom, narrative, the ability to excite. The jewel can and must be all of that. If that would be a question, harmony would be the answer. For the past 15 years, Creativity Oggetti has been aiming its spotlights on artists and designers committed to researching and creating hand made masterpieces, acting as facilitator between the artists and the public, and promoting mainly unpublished works. The idea to lend a voice to those who research, or maybe even dedicate their life to define a personal artistic language, can be a good reason for conceiving and promoting a competition dedicated to the contemporary jewel with an international outlook. “The Posing Jewel” aims to be a showcase that provides professional opportunities to all participants.
The works are on exhibit and for sale until June 30th 2017, and will leave a trace of their passage in the catalogue “Il gioiello si mette in posa” (The Posing Jewel), with texts by Paola Stroppiana and photographs by Federica Cioccoloni.

...All proposals for this edition show a great adhesion to the concept, while never betraying the specificity of their research: Angela Ciobanu (Bucarest-Romania, 1984) inverts the perspective of the jewel from being a body ornament, an object to exhibit, to being an integral aspect of the psychology of the wearer, conferring memories and experiences which become exclusively his or hers and no one else’s.  Forget me not (realised with delicate materials, like recycled silk, in order to underline the fragility of memories) is a talisman of memories, a secret pact with the wearer, an accomplice of emotions, a private language. A 360° artist, Renata Manganelli (Turin-Italy, 1968) came to the world of jewelry along a winding but coherent path, in which her expressive potentials always knew how to contaminate each other in harmonious ways. With her work Ossimori, she tends exactly towards the harmony of contrasts, both in conceptual expression and matter (porcelain and bronze in lost wax casting, organic and inorganic matter), and even in the final fruition of the object as being worn and/or purely decorative. Her ring becomes an accomplished artifact, a spatial volumetry of aesthetic and functional autonomy, whatever its use. Correctly denominated a meta-sculpture, metamorphosis in fluid transformation, it even comes with a container sculpture, according to the desire of whoever places it in the space around him/herself. Metamorphosis, this time of Nature, is the research theme of Mabel Pena (Buenos Aires-Argentina, 1958), who is focussed on the use of natural materials, in this case the loofah plant, originally from Asia, from whose fruit sponges are made. Racemes which soar in the air, ascending to reaffirm the self-regenerative power of nature itself: elevation, growth which becomes totemic presence, poetic affirmation, primitive force. Shape, knowledge of an ancient technique like origami, matter, and even the chromatic aspect: everything for Lital Mendel (Holon-Israel, 1979) becomes an instrument to create a container of memories, like the old pendant-receptacles which in various cultures can be chests of precious elements, and, by extension, of memory. The Japanese culture is a conscious choice, since it embodies high manual skills at the service of complex concepts, not free from emotional implications as poetry or nostalgia. For Nikolai Balabin (Leningrad-Russia, 1955), technique is the conceptual junction of his research: casting sand becomes a metaphor for life. The artifex relies on processes that are close to divination, reading fate through chance, unexpected solutions, dizzying potentials multiplied in a universe where chance determines the outward appearance, and consequently essence itself. Quotations of constructivism, deep architectural culture, visionary qualities at the service of an idea: to Nicole Schuster (Gelsenkirchen - Germany, 1981) the place becomes topos, concept; the bridge becomes the passage, uniting and reclining, in this case on the hand. The body becomes the landscape. When not worn, the ring with its small organ pipes, is elegantly reminding of ascension and its opposite, enhancing the platonic idea of the bridge as a symbol of connections, both physical and mental. Rafael Luis Alvarez, (Buenos Aires-Argentina, 1959) puts himself in relationship with the visible and invisible worlds with a solemn and dreamlike attitude, and builds with his pieces a wearable cosmogony which relies on names of ancient divinities. Gea, in fabric and rubber, is to be placed in a much broader vision, in which the goddesses of the Earth, etheric figures, are evoked through a very personal language, variously declined on the fingers: a light and new presence in space. Nicolas Estrada (Medellín-Colombia, 1972), in the series called Spring, elevates wood to a noble and austere material. The choice of a tree connected to his Colombian roots, the Comino Crespo, totally reflects the spirit of the artist. The perfectly proportioned sculpture that becomes memory, also becomes symbol and nostalgic feeling, intended as a return to the origins not without visionary imagination: thoughts germinate brilliant pearls, perhaps tears, perhaps dreams.  Liliya Milpetrova (Kazanlak-Bulgaria, 1981) carries out a refined design operation, in which the aesthetics of modernism is deconstructed and rethought in an ironic manifesto with surreal strokes. Materials such as wood and brushed bronze are organised in compositional modules, which bring to mind the furniture of the '50s and give the ring, absolutely unisex, a compositional rhythm which lifts it from any functionality, returning it to pure design. Stenia Scarselli (Volterra-Italia, 1968) re-uses parts of an old piano to give life to a new object, imaginable on a bigger scale, difficult to interpret as a ring if not worn, but rather as an abstract sculpture, rendered aerial by the upward thrust. There is a perceivable energy in the compositional devising, in the choice of contrasting chromatics, in the playful association to a trampoline, which is also the work’s title, to a medieval walkway, to a redemptive passage. By choosing to counterpose two geometries, two polished and rigorous metals, Laura Forte (Copertino-Italy, 1982) expresses her willingness to realise an innovative shape, spotless and essential, autonomous and accomplished in its essentiality, which refers to certain balances between exterior and interior, inherent to oriental culture and minimalistic taste. A conscious playful approach marks the research of Marco Malasomma (Caserta-Italy, 1968), who treats matter with a nonchalant lightness, up to the point of creating a magic box, almost a mechanical gadget where geometry, purity of lines and technical wisdom coexist with a certain taste for divertissment. Anna Król (Cracow-Poland, 1983), gives life to an object of great sensitivity, a ring – magnet for thoughts and emotions – an experimental technique in service of an idea. A sphere which closes in on itself, letting its content shine through without revealing it, as if endowed with a life of its own, autonomous from who created it, yet still an accomplice...

...For the second edition of Creativity’s Contest, the precious collaboration with photographer Federica Cioccoloni is confirmed. For the works on exhibit, she created a particularly elaborate still life photo-shoot, specifically designed for the occasion, and an exclusive photo-shoot for the winning piece, a real working tool for the designer-artist.

Starting from the strong sculptural component of the jewels resulting from human creativity, Federica thought, by contrast, about a comparison with shapes and colours of Nature, selecting aspects of strong chromatic and volumetric impact to be placed in close dialogue. This tight comparison allows to highlight new aspects of the jewels, thanks to the material patterns of flowers and plants which become original graphic elements, always functional to the exaltation of the sculpture-object.
As it is in its nature, the photographic medium becomes a creative language in itself. In Federica’s intentions, this can generate elements of reflection, not only in the end-user’s perception, but also in the artists themselves, who can review their own works from another point of view and discover new potentials. The enhancement of matter thus becomes an element of formal and conceptual continuity between the aesthetic research, at the base of the jewel, and the sensitivity of those who reciprocate the expressive force in the image.

Federica Cioccoloni (Rome - Italy, 1978) lives and works in Rome. During her studies at the Art High School before and at the faculty of History of Contemporary Art later, she developed a taste for composition and studied the sculptural power of light. In 2010 she graduated from the Roman School of Photography, focussing in particular on the still-life technique, starting from basics, with film rolls and optical bench. From 2012 onwards, her artistic and professional research was directed towards jewelry photography, with special focus on researching the contemporary jewel and its various declinations. In 2012 she also participated in the collective exhibition I.M.A.G.E. in Rome, organised by the “Italia nel Cuore” Association, and in 2014 she co-created the first Creativity Contest, where she exhibited her images at the Turin showroom, promoter of the competition.
Since 2014, she conducts a very personal aesthetic research, whose aim is to free still-life from being just studio photography, by taking it outside and adapting light conditions and textures found almost casually to the aesthetic needs of the object she wants to capture. 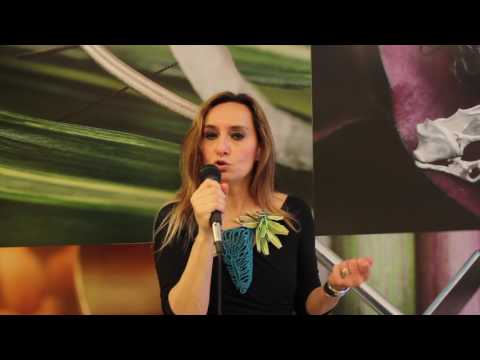 925 silver oxidized with the use of black ceramic paint

bronze ring with mechanical transformation, from sculpture to the ring; patina, support in bronze.

The site uses anonymous technical and analytical cookies and third-party one's. By browsing this site you accept the use of cookies.